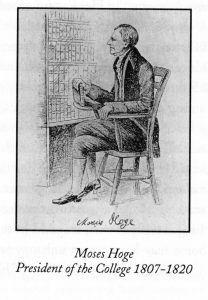 In 1805, Moses Hoge was called to be the president and professor of theology at Hampden-Sydney College.  He also presided over the school’s theological library, the institutional forerunner of Union Presbyterian Seminary.  Dr. Hoge was an impressive man.  Writing to Francis Scott Key (author of the national anthem), John Randolph of Virginia wrote:

There is but one man in all of Virginia who ought to preach, and that is Dr. Moses Hoge. I consider Dr. Hoge as the ablest and most interesting speaker that I ever heard in the pulpit, or out of it … and if he has a fault (which being mortal, I suppose he cannot be free from), I have never heard it pointed out.1

Dr. Hoge did not see himself as an agent of change in social justice, particularly where the issue of race was concerned, but he also did not accept the status quo.Though he took personal action against the enslavement of human beings, he never called for its abolition.2 For a time Hoge and his second wife Susannah even owned enslaved persons. Susannah had inherited enslaved persons following the death of her first husband. She purchased others in Charlotte County when, as a widow, she needed help operating her farm. The new couple quickly became uneasy with the institution of enslavement. They were disturbed by the deplorable housing enslaved persons endured, their difficult conditions in servitude, and the casual way enslaved families were ripped apart.  They often spoke out against the abuse of enslaved persons even when the offending owners were neighbors.  They also used their own money to re-unite enslaved persons who had married and were subsequently separated.3  Hoge sat with sick and dying enslaved people, was available to talk with them, and welcomed enslaved persons into his home for communion.4  In his actions, then, he was an early witness for social change with regard to race.  However, it was change on an exclusively personal level.

On the broader social level, Moses Hoge was instrumental in the founding of Virginia’s only chapter of the American Colonization Society.  He and Susannah freed all of their enslaved persons at that point and resettled them in Liberia.  His act of liberation was both gracious and disturbing.  The freeing of his enslaved persons did not result from an understanding of racial equality that presaged integrated racial community.  While he believed in the universal kinship of all people in God, he also felt that enslaved people who had been emancipated and free blacks should not live in America but should be deported to an Africa most of them had never known.