A new justice-oriented theological perspective, in the context of a seminary in an urban setting, provoked a distinct change in student perspective and activity. Following the seminary’s removal to Richmond, in the early 1900’s, Union students established over 40 different missions around Richmond. Students developed an expansive social outlook that pitted them against the values of the culture in which they lived.  Less than a decade after Virginia discarded the Reconstruction Constitution in favor of a constitution that institutionalized the “separate but equal” Jim Crow laws, Union students began a mission to the residents of the segregated neighborhood known as Hell’s Bottom.

Union Seminary student Cothran Smith (B.D. 1923), who had worked in the mission, wrote of the Seventeenth Street (or Hell’s Bottom) Mission and its impact:

For almost a mile, the C. & O. Railroad Yards run parallel to a little creek that the city has converted into an open sewer.  In the ravine carved out by this stream lie huddled the buildings that serve as homes for seven hundred Negro families. The air of the place is tainted by fumes from the stream and soiled by smoke and cinders from the locomotive works and its switch engines. In this sordid atmosphere, between the factories and shops, their children grow up in much grime and blackness and sin.24 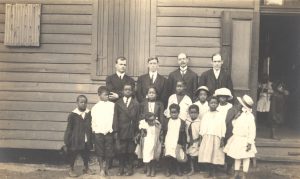 Smith’s description is an accusation against the church. There within range of a church bell were hundreds of children who played and fought in the streets all day Sunday, because they had nowhere else to play and nothing else to do.

Although his article is steeped in the paternalistic attitudes reflective of the times, it also expresses a compelling desire to help others across racial lines.  In the fall of 1911, three students—Thomas Sheldon (B.D. 1913), Tom Ruff (B.D. 1914), and Arch McKinnon (B.D. 1912)—convinced the Presbyterian League of Richmond to pay $8.00 a month to rent an abandoned chapel on Seventeenth Street.  In November, the students moved in and opened a Sunday School. The school had 12 charter members and during the course of the winter grew to an average attendance of 30 pupils.  During the week, 20 volunteers from the Assembly’s Training School and from Union Theological Seminary visited in neighboring homes as well.

Upon the graduation of McKinnon, leadership was assumed by Matt McMurray Grey (B.D. 1914).  Of Grey’s ministry, Smith writes:

The Mission has never known such a tireless worker as Mr. Grey. There was scarcely an hour of the day when he was not visiting in the homes of his people, distributing food and fuel, relieving the sick, restoring the fallen, teaching the children. … Mr. Grey organized a sewing class for the girls and taught the boys to weave baskets and to repair cane bottom chairs.  Under his leadership, the Sunday School grew to an attendance of more than a hundred.25

Cothran Smith relates that their efforts bore fruit in unlikelyplaces:

Some time ago, one of our boys was arrested on the suspicion that he had been raiding a fruit stand. The judge asked the boy point blank whether or not he had taken the fruit. “Before God, Boss,” he said, “I didn’t do it.”

“What do you know about God?” was the Judge’s next question.

The boy braced himself with a long breath and replied, “God is a Spirit, infinite, eternal and unchangeable, in His Being, wisdom, power, holiness, justice, goodness and truth.”

“Where did you learn that?” the magistrate asked.

He stated that he had learned about God at Seventeenth Street Mission.  His case was promptly dismissed.26

Once students from the General Assembly’s Training School joined the Mission in 1914 as teachers and volunteers, the effort became largely staffed by women.  ATS student Cornelia Wilds reports:

(The mission) is the center of the Presbyterian Colored Mission work in Richmond, and we are interested in it because of the bigness of it and the need of it.  On Tuesday afternoon a sewing class is conducted by several of our students and on Sunday afternoon others teach in the Sunday School.  Our girls are helping in every way they can to build this work up.  It is growing rapidly and we feel it is going to grow for three reasons: prayer for all who are working in this mission … those who are helped are telling others … [and] visits to the homes are made every week by the teachers – this is where we come into the closest contact with them, for here we learn of their daily lives, their joys and sorrows, and bring to them their one great friend, Jesus Christ.27 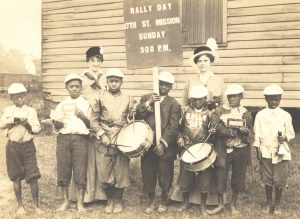 Further information and archival photos of the Seventeenth Street Mission can be found here.