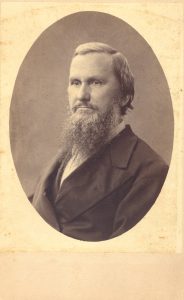 Robert Lewis Dabney and Benjamin Mosby Smith succeeded Professor Baxter on the Union Seminary faculty.  Dabney was a Confederate officer who served as chaplain and chief of staff to General Thomas “Stonewall” Jackson.  After the Civil War, Dabney published A Defense of Virginia, and Through Her of the South (E. J. Hale, 1867).  It was one of the most influential theological works of its time, serving to bolster the Lost Cause mythology of the South.  The book’s argument was a familiar one in the antebellum era: since the enslavement of Africans by Europeans was permitted by the curse of Noah upon Ham, human enslavement was justified by Scripture.  In God’s providence, human enslavement had actually turned out to be in the best interests of the Negroes, the South, and the nation as a whole.

Dabney’s legacy is one of sad insularity.  He constructed an inflexible theology and nurtured a seething hatred for the North.  It was his all-consuming racism, however, that seared his view of life.  Immediately after the war, he was alarmed over the freedmen in the Mercy Seat community adjacent to Hampden-Sydney.  He could not stand to see former slaves become landowners and prosperous, and his solution was to leave.  At various times between 1865 and 1880, he thought about emigrating to Australia, New Zealand, Mexico, Venezuela, British Honduras (present day Belize), or Brazil.15

It appears to me that there are only two prospects for the South.  Parts of it will continue under the present paralysis, until they sink permanently into the condition of Jamaica. … Other parts will again see material prosperity; but only by being completely Yankeeized .… I fear the independence, the honor, the hospitality, the integrity, the everything which constituted Southern character, is gone forever … the only chance to save any of the true Christianity of the South is to transplant it as quick as possible.16

On January 2, 1867 he again wrote to Hoge: “Either the Negro must move, or the College and Seminary must move.”17

Dabney’s racism was representative of much of the nineteenth-century Virginia culture. Dabney was not the only one to feel anxious about the increasing ownership of land by freedmen.  Both seminary and college felt under siege, especially when freedmen owned land adjacent to the south edge of the Seminary grounds.  In the minutes of the Spring 1876 meeting of the Board of Directors of Hampden Sydney College, there is a paragraph entitled “Colored Population”:

Resolved, that Dr. J. D. Eggleston be requested, on behalf of this institution, to aid the faculty in any feasible plan of preventing the settlement of an undesirable population in the vicinity of the Seminary.18

In 1874 the faculty had ordered that the students and “the Seminary servants” be informed “that no freedmen can be admitted to the Seminary, for service, except those regularly connected with the Intendant’s department, and the messes.”19 By the 1880s, Seminary professors and trustees were concerned with declining land values.

Dabney’s colleague, Prof. Benjamin Mosby Smith, took a distinctly different approach to postwar adaptation. While Dabney was ratcheting up his tirades against “the Yankees,” B.M. Smith was cultivating Northern donors, who rescued the Seminary from financial ruin.  Dabney was implacably opposed to public education and believed that black children should only be trained to do manual labor and other service tasks.  Smith spent his adult life working to establish public schools in Virginia for all children, regardless of race, supported through tax revenues.  He volunteered to chair Prince Edward County’s first public school board from 1865 to 1881 and served as the county’s Superintendent of Schools for eleven years.20 When he died in 1893, Smith had managed to turn the Seminary toward the future in significant ways. 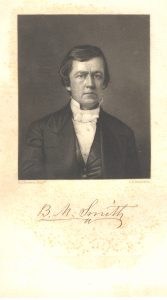