On February 1, 1960, four African-American college students sat down at a lunch counter at Woolworth’s in Greensboro, North Carolina, and politely asked for service.  Their request was refused.  When asked to leave, they remained in their seats.  The “sit-in” was born and became a tactic of the early civil rights movement. Students from Virginia Union University immediately targeted Thalhimers and Miller & Rhoads, downtown Richmond’s most prestigious department stores, for a sit-in and picketing.  Although Union Seminary students were not initially involved, E. T. Thompson pricked the Seminary’s conscience with his gentle question: “If this is a struggle for what is right, why are only black students involved?”  This observation led to an open meeting a few nights later in the lounge of Lingle Hall.  Students from Virginia Union were invited to tell the students of Union and PSCE what they were doing and why.35 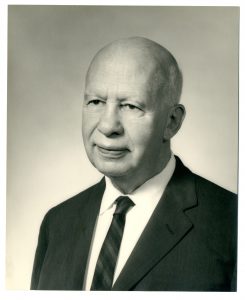 After a long and emotional evening which included some fine examples of preaching in the black church tradition, which elicited more than one “Amen” from the Presbyterian audience, “God’s Frozen Chosen,” I made the foolish mistake of asking what we could do to help.  I was immediately presented with a “time sheet” and told to sign my name when I would show up on the picket line.  Trapped!  Fortunately several classmates joined in responding to this “altar call.”36

One evening later, the Seminary community gathered in Watts Chapel for a public reflection led by faculty members.  Professor Benjamin Lacy Rose observed that he had been a public opponent of segregation for a number of years.  He went on to say that while he did not see his role on the picket line, participation by the students could be appropriate.   Conn remembers Prof. John Leith’s remarks as especially meaningful:

[He warned] the student body that neither those who marched nor those who stayed on campus should feel “right” or “superior” to those who chose otherwise.  He reminded us that whatever we did was made inadequate by the distortions of sin, but that when offered up in faith, God had both the capacity and will to make it good.  For the first time in my life I understood the Doctrine of Justification.37

Less than a month after the first sit-in, a group of Union Seminary students marched in downtown Richmond on February 23, 1960.  Their “shift” began at 2:00 p.m., but before picketing they received “a brief orientation on how to behave and react.  Speak to no one, look straight ahead, do not block traffic, dress well, if struck fall to the ground in a fetal position and protect your head and genitals.  The last bit of advice was not encouraging.”38 There were three students from Union who participated on the first day: Aubrey N. Brown, III (B.D. 1961), George Conn, and T. K. Morrison (B.D. 1960).  They walked for a 20-minute shift and then others took over.  Their pictures were prominently featured in a RichmondTimes-Dispatch story on March 6, 1960.39 The story and picture were picked up by the Associated Press and printed around the country.  George Conn remembers:

As the days wore on, toughs gathered to jeer us, with looks of indescribable hatred on some faces. A little spit here and there marked most days as we took the ninety-six steps from one corner to the next, four steps to make the turn, ninety-six back and so on. There was encouragement, comedy, and sadness.  Along the way I remember the elderly black man who dared not look directly at me as I passed him, but I was renewed by his quietly muttered “God bless you.”  I remember the lady with the Chihuahua which charged the police dog, entangling both leashes as the police dog cowered.  I remember the frail and elderly “lady,” the seeming epitome of southern gentility, who took one look at me and my sign and who hit me across the head with her pocketbook while calling me a “God damned son-of-a-bitch.”40

[PSCE President Charles E. S.] Kraemer, in our meetings about how to handle the situation and our consciences, told us in effect that it was between us and our God, and to do what we felt we had to do. … I will never forget his leadership and love in this situation.  It was a symbol for me of all this school stood for.41

This public action polarized the Seminary community.  Some students, mostly seniors, complained that the public demonstrations were jeopardizing their search for pastoral positions upon graduation.  While some faculty members disapproved of the public demonstrating, Professors William Bean Kennedy (B.D. 1954, faculty member 1959–1965), who taught Christian Education, Leith, and Rose were outspoken in their support and encouragement.42

A similar conflict erupted during and after the March on Washington in August 1963, led by the Rev. Dr. Martin Luther King Jr.  During that event, Prof. Kennedy and Union student Arlan East (B.D. 1965) were among the more than 100 members of the PCUS who traveled to Washington to participate.  Their decision to do so was fully debated in the pages of The Presbyterian Outlook, the primary news publication of the southern Presbyterian church.  More information on this event can be found here. 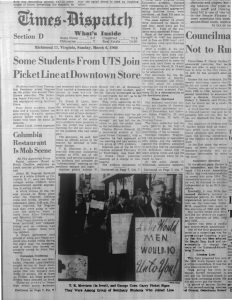